Looking northward from the dock at Liberty State Park

Friday was a cool, rainy, wind-swept day.  Perfect weather for a ferry trip from Liberty State Park to Ellis Island.  Gail had been there four, five, or six times previously with 70 eight and nine year olds in tow.  This trip was to prove to different in many ways.  Driving up to Liberty State Park is an experience.  You drive on a congested two-lane offshoot of the turnpike toward Bayonne and Jersey City.  You’ve got Death Cab for Cuties Plans CD playing loud because you just saw them then night before at the Wellmont Theater in Montclair, and that is your favorite of their albums.  You get off the slow-moving highway into what looks like nowheresville, NJ.  Sure Manhattan is looming right in the background, but you’re in this quasi industrial/rural-like forgotten part of New Jersey.  But there are signs that lead you.  Make a left.  Then another left.  The road surface goes from okay to neglected to – what’s this – cobblestones?  You don’t dare take the Honda out of second gear.  But you’re on a long straight road (could have been built by our forefathers, but realistically it was built in the past 25 years when this whole area was completely cleaned up and.  You drive the road and you see what looks like a grand ghost to an industrial age long past.  A huge railroad terminal at the river’s edge.  Maybe a dozen tracks feeding into it leading… nowhere now.  We parked the car and walked to the rusting steel fence.  The tracks are all covered but the weeds – many of them as big as basketball poles – have taken over.  We walk alongside the tracks maybe 500 feet until we get to the main terminal that feeds/once fed  the tracks.  This main terminal has been completely renovated/rebuilt and now houses the ticket purchasing and security to take visitors to Ellis and Liberty Islands. 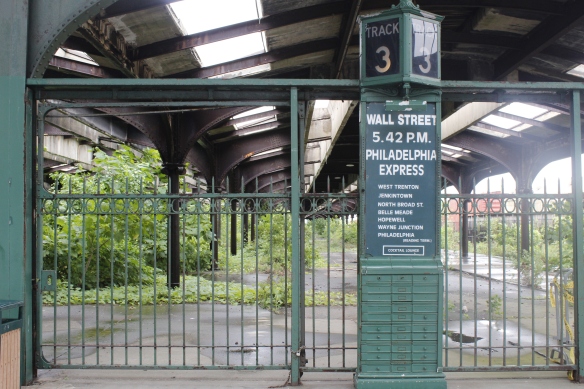 Beware of ghosts: inside the main terminal remnant signs from an earlier era

Gail remarked what a difference a rainy day in July makes.  She had never seen the terminal so empty.  She bought our tickets, we walked outside to the grey to wait for our ferry. 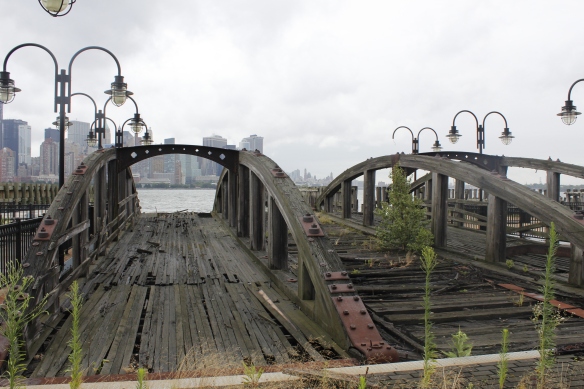 Ghost slips waiting for the ferries from days gone by

Visiting Ellis Island is truly visiting a another world – doors are opened to a past 100 years before.  The main building has been completely restored, and walking through the hall and all the rooms you are reminded of visiting Alcatraz: it’s been fixed up to accomodate the throngs, but the past is always looking down upon us.  It’s all about learning and appreciation: Learning that it was just the steerage passengers who  were sent to Ellis Island; the first and second-class passengers were processed toward the end of the Atlantic crossing.  When their vessels docked in Manhattan, they were free to leave.  The masses in steerage had to then board ferries to take them from the docks of Manhattan to Ellis Island. 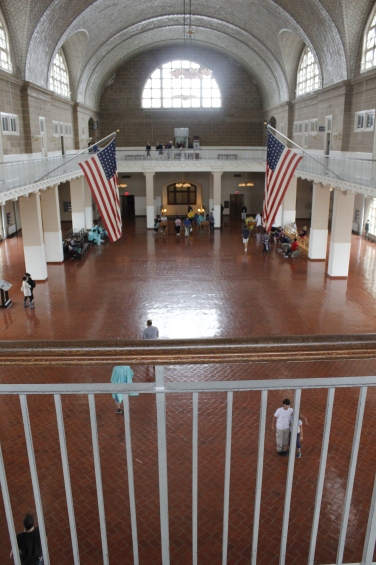 upstairs looking down upon The Great Hall, where thousands milled around waiting for their name to be called to start the processing.

Probably the most powerful display was on the third floor of the images taken before the restoration.  Looking at Ellis Island in all its dilapidated glory was truly a visual experience.  Rooms covered with torn sheets of peeling paint. Broken windows.  Grime. Dirt.  Decay.  It helps you realize what was once there years after what is being celebrated and before all the restoration began. The ruins are fabulous, but it can’t stay that way.  To make it a destination, revitalization has to come in.  And it makes sense.  The island was revitalized throughout its history: the main building was a wooden structure that burned to the ground five years after it was built.  The new “fire proof” building was built in the late 1880s (maybe?  fact checker?)

Okay. I didn’t take this shot. However, it gives you a good visual representation of the island and the huge circular wall of names.

The circular wall of names outside the Great Hall

Here are the Lazaroffs. None of these are my direct relatives. My great grandfather Michael Lazaroff came over previous to Ellis Island. He came into New York via Clinton Gardens (now referred to as Castle Clinton). There will be more about this in a future post. 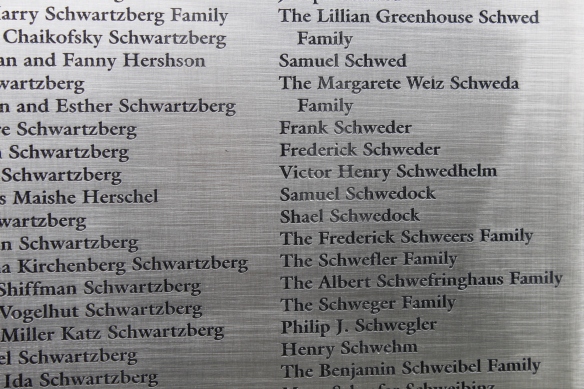 Gail’s grandfather Sam is listed here – thanks to her Aunt Sandy and Aunt Alice for (probably) making the listing happen.  Shael is her great grandfather (she thinks).