On the corner sits 1771 Georges Lane in Wynnefieild, home of my grandparents until they moved to Ventnor, NJ in 1967 and home to my dad until he got married in Nov. 1957.

It was a beautiful fall day when Dale and I drove up to the house we knew of as Mom Mom and Pop Pop’s.  We had not been back there since they moved down the shore some time in 1967, so doing the math that makes it… 45 years or so.  Man oh man.  We didn’t know what to expect (though I did some research using Google Maps before our trip just to prepare myself in case it had been torn down so I learned it was still there and intact).   The house looks to be in great shape, and under sun-drenched skies we get out of the car and walk towards it.

It’s a feeling of celebration heading toward the house: it’s still here!  There’s been changes, as there should. New casement windows in the front of the house (along with security sign in the window), vinyl siding on the second story, the stubbed roof over the first floor is the foundation for a small satellite dish.  Any older home that keeps its value will have seen such changes.  But the special character of the place has stayed the same.

Pop Pop Harry with his next door neighbor sitting on their shared steps at 1771 Georges Lane. Photo taken in 1959.

Look at these two images – taken over 53 years apart.  The older image must have been taken on the landing between the three steps that lead to the sidewalk and the six steps that lead into the houses.  The windows are still there (though the neighbor’s windows now have bars.  Now, in the recent shot, a black wrought iron fence separates the two properties.  “Good fences make good neighbors” is a New England truism, but is there really a need for a fence dividing the step?   Reading the older image, I can’t imagine my grandfather or his neighbor wanting to put a fence up between the two of them.  Look at the drain pipe at the left of my grandfather – its still there (probably – hopefully – a newer incarnation but in the same location).  My grandparents are in the prime of their lives in these old images, and in paying tribute to them by visiting their house, I continue to feel them with me.

Mom Mom Liz and Pop Pop Harry posing in front of their home in 1959.

I have so many memories of this house – big family Passover dinners and sleepovers in which Mom Mom and Pop Pop would tell stories of the old days.  There was always a candy store on the ground floor (in the picture above you can see a sign for money orders and Tareyton cigarettes – the store still existed).  I have no memories of the store itself.  For me, the ground floor, once home to the store, was a large storage area form the stuff my grandparents had accumulated.  I do remember fixtures, but the store had long been closed.  I remember stacks and stacks of old newspapers from World War II.  Maybe because their son, my Uncle Milt, had served in WWII they saved every paper.  I also remember a big victrola with a horn and a cache of 78s.  I wish that was saved, but it wasn’t.  In their big move to Ventnor, a lot of old “worthless” stuff was tossed, I later learned, including the victrola and old records.

As Dale and I were looking and taking pictures of the house, a young man opened the door and walked down the steps.  It seems he grew up in the house.  I spoke to him about this project, and he went inside to get his mom.  She then came out and, interested in what were there for, told us she had lived in the house about 20 years, fixing it up as she along.  She had her suspicions that a store used to be in the first floor, which she fixed up to rent out as a separate apartment.  She didn’t invite us in, and I’m unsure what I would have done if she had.

On the other side of of my grandparent’s house is the intersection of Montgomery Ave. and Georges Lane, circa 2012.

Returning to the car for a wider view of the neighborhood, we look down Montgomery Avenue that the Georges Road house intersects and I take the above shot.  The Community Mini Market, across the street from their old house, is the latest incarnation of a grocery store that was there 45+ years ago.  I have memories of sleepovers at Mom Mom and Pop Pop’s, and a highlight would be going across the street to pick out dessert (it seemed I always selected ice cream sandwiches).  And it was right across the street!  I have always felt the need to live near commerce – to be near places that sold usable stuff.  Last night, in fact, hanging out in Teaneck about 9:30, I walked over to Bischoff’s to get Gail an ice cream sundae. It was a cold night mid-December night, but Bischoff’s is only a few blocks away.  It continues to give me a great feeling to walk to places.  And – carrying on with the family tradition – Jake’s new apartment in Prospect Heights, Brooklyn, has a supermarket and a 24/7 diner right across the street.  Throughout my life, every place I’ve lived has been in walking distance of local shopping.   Maybe it all stems from having a grocery store right across the street from my grandparents as a young boy, and realizing the comfort and opportunity such a location brings. 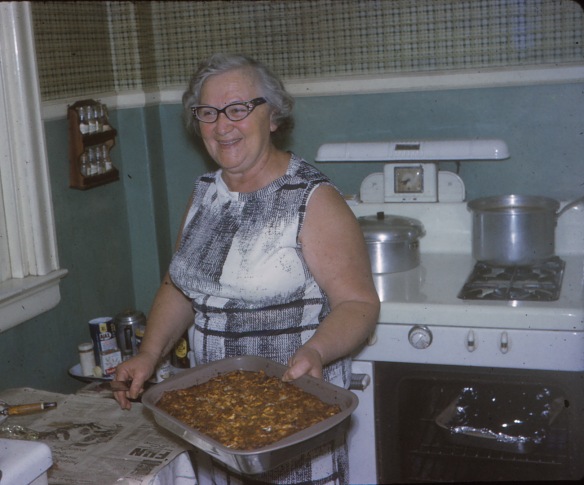 Mom Mom Liz, as I’ll always remember her, in the kitchen. This was taken Passover 1967 in Georges Lane. Look at the smile on her face! We should all be this happy and fulfilled. One of her many sayings: “You don’t need to be hungry to eat!.” 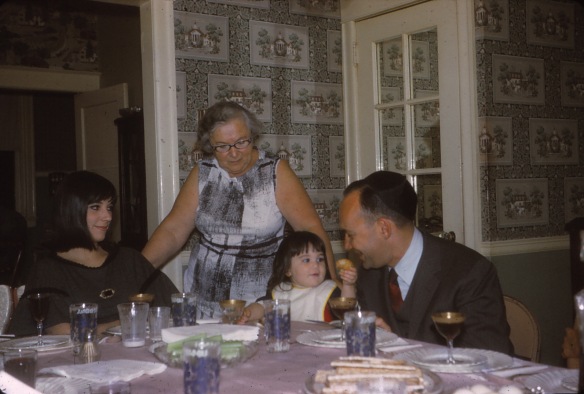 Passover 1967. Mom, Mom Mom Liz, Robin, and Uncle Milt in the dining room in Georges Lane. I have such strong memories of the wall paper!