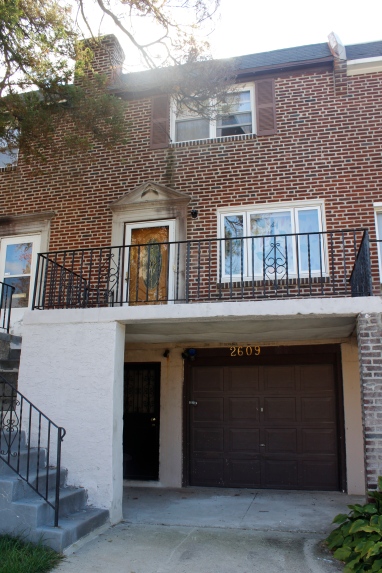 2609 Sorrento Road in West Philadelphia, where Dale and I were born (well, brought home from the hospital). We lived there from 1959 until spring of 1965.

Sorrento Road is part of a huge semicircle.  Dale and I park up on Lenape Road – up from Sorrento but part of the semicircle – because I want to walk to our old house 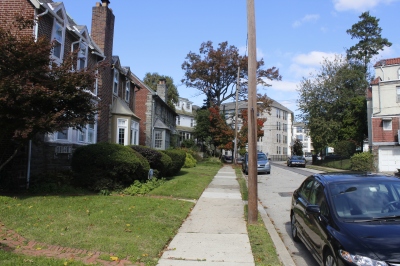 If we were walking from our house on Sorrento Rd. and up Lenape, this is the view (Conshohoken Ave. is the next insection). You can see our Honda Civic – we just left the car when this picture was taken.

from a certain vantage point.  I remember Lenape:  And on this beautiful early fall day the homes here are very well-maintained: distinguished-looking row homes and single family homes, close together.  It is a few weeks shy of the election, so there are lots of “Obama / Biden” signs posted on small front lawns or taped to casement windows.  I remember walking up this block 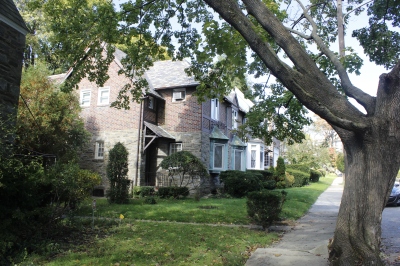 On the other side of Lenape, looking down toward Sorrento Rd.

many times in my childhood days, or maybe being strolled in a stroller.

Maybe because the sidewalk never ended – Sorrento just “became” Lenape as the semicircle bent – I possibly walked on my own as well.  I had some walking adventures living here when I was just a toddler.

Because of the Bala Golf Course behind Sorrento Road and the surrounding streets and avenues, there are no intersecting roads.  As a three-year-old I wandered away from dad one day while he was “watching” me and Dale in the backyard.  I was gone a long time, walking what seemed like forever at the time. From Sorrento Road I took a right onto Conshohoken Avenue and then a left onto Belmont Avenue.  And I was able to keep walking, past the Inglis House for “the incurables” (now home for the “physically disabled.”) Past the Hayes Manor Retirement Home.  All because there were no intersecting streets to cross, just a sidewalk that seemed to stretch on and on.  I may have been three, but I knew I shouldn’t cross any streets.  I didn’t and I kept walking. Eventually I got scared, and somehow found my way into an apartment complex (probably Hayes Manor) where there was a nice lady (who gave me some cookies and probably called the cops).  The next thing I remember is being in the back of a police car with mom who was crying and hugging me.  She would retell the story throughout the years, and with say my disappearance, even if only for a few hours, was one of the most agonizing times of her life.   In our recent visit, Dale and I reconstruct the same walk I undertook as a three-year-old, and it was indeed far, and there were still no streets to cross. We were very impressed.  And disturbed. 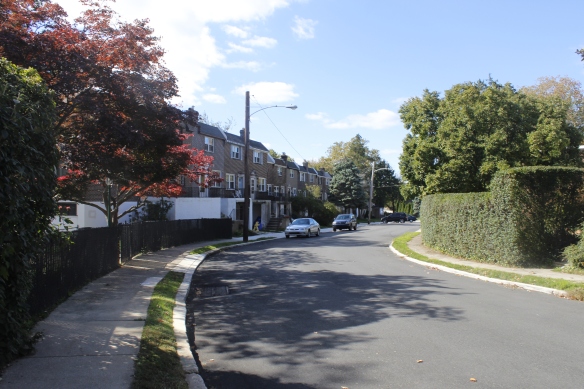 Sorrento Road and its long sidewalk, stretches out. Our house would be toward the back of the row homes. October 2012. 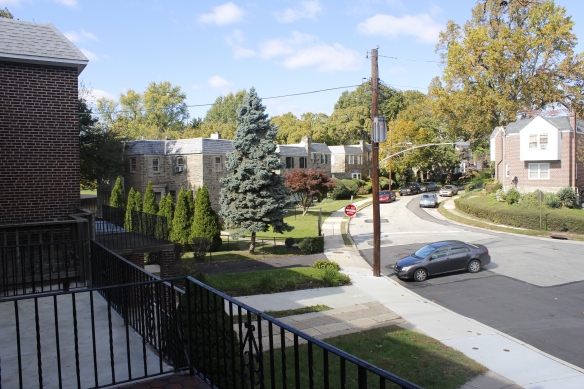 Dale and I climbed the front steps of 2609 and took a chance: we knocked on the door. No one was home. We lingered for a few minutes on the front porch and took pictures. 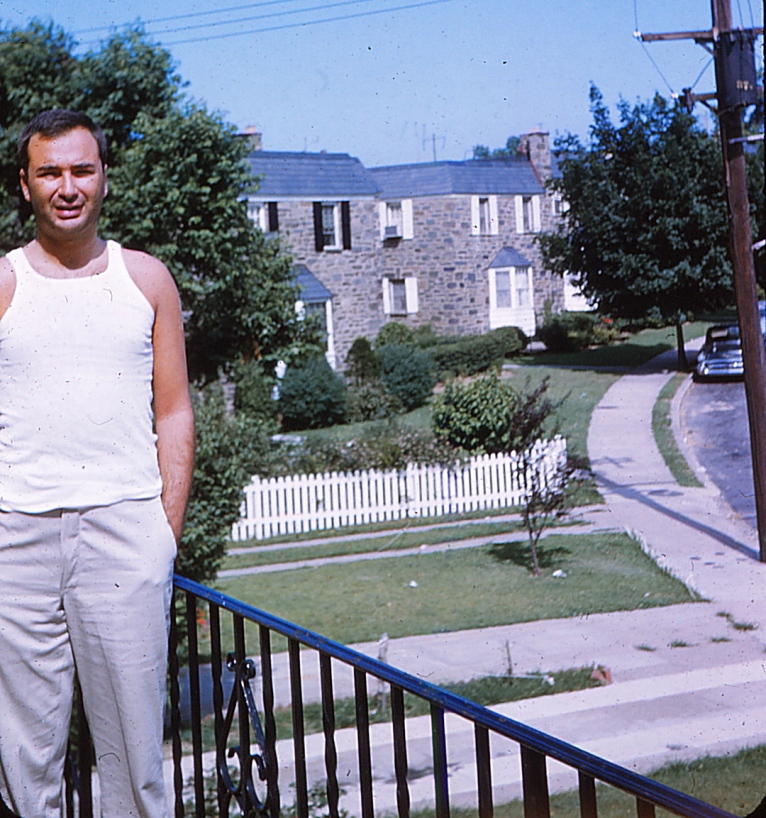 Here’s dad standing in the same spot – in 1959. How similar it all looks. Looks like mom (I’m assuming she’s the photographer) cut off a bit of his right side (Maybe to include the telephone pole?)  But that pole (or a future generation of it) is there in the 2012 shot. 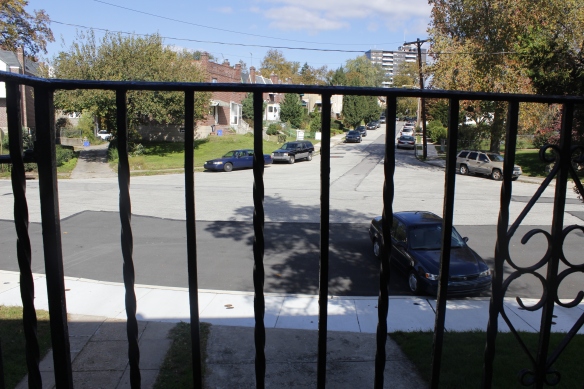 Standing on the front porch, looking up toward Conshohoken Avenue circa 2012. 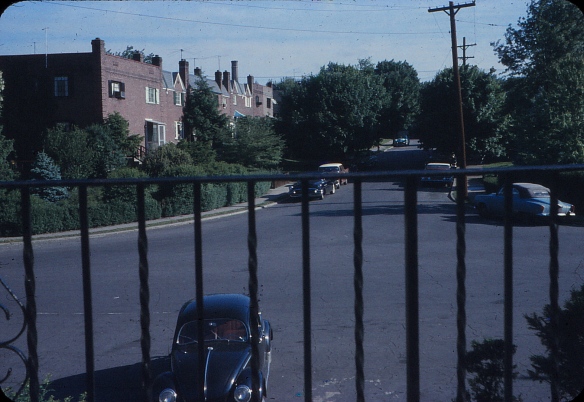 Looking at the above photos (and even more convincing: being there) so much of this block, of this neighborhood, seems impervious to change almost half-a-century later.  When I was young, my whole world was in this neighborhood, and the others nearby where my parents would take me and Dale (grandparents’ houses; Bala Cynwyd shopping center just over City Line, about three blocks away; and of course Atlantic City in the summer).  Dale and I had our friends, Richie (a few years younger) and Robin (Dale’s age)  Markowitz just two doors down, and in 1965 when we moved to Upland Rd., the Markowitz’s followed suit, left Sorrento Rd. and bought the house right across the street from us.

This house on Sorrento Rd. must have felt a continuation of sorts for my folks.  They were both raised in row homes, and they began their new family in a row home.  They were so close to the worlds that they knew: when they moved in, both of their homes in which they grew up were less than a mile away from here and for mom, the site of her grandparents home in Bala was only about four or five blocks away.  They must have still felt in the middle of it all.

Places imprint so strongly.  You were only five years old, yet you remember these streets and the way the houses look, the way that sunlight reflects off of surrounding surfaces.  Something about that Philly reflective sunlight that brings you right back.  You think of long days that seemed to stretch on and on.  Visits to parks, to people’s houses, to stores.  Yes, you remember those ghostly visits, but you also remember smells.  Not just the expected Philly smells of cheesteaks and soft pretzels, but your own family smells.  Mom Mom’s kitchen.  The pizza truck that parked in front of Har Zion Hebrew school in Wynnefield (slices were 25 cents).  And you remember the smell of walking into Lord & Taylor’s.

There was something about the smell of the vestibule of Lord & Taylor’s at the Bala Cynwyd Shopping Center that sticks with me to this day.  There was black rubber matting on the floor, and the smell that emanated I still identify with so strongly.  Mom was lucky enough to have an upscale department store so close to our home, we probably went there often.  I do remember a kind of puppet/variety show that they held there, maybe to placate the little terrors while their moms shopped.  But that smell still takes hold (though in our visit, the vestibule was under construction.  There were smells, but not MY smell). 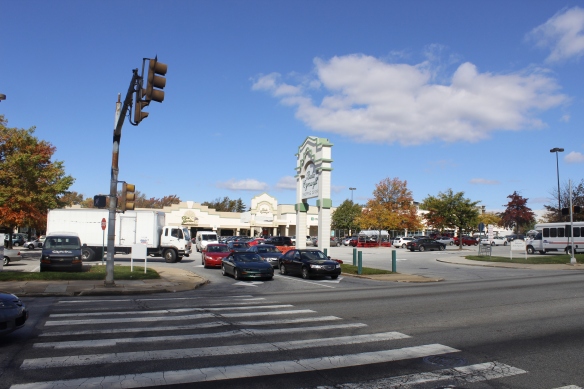 Just a short walk from Sorrento Road to the Bala Cynwyd Shopping Center. Of course all the stores have been replaced (save Lord & Taylors). Where the Olive Garden now stands used to be Horn & Hardharts. I loved that place, and considered it a great treat to eat there. My favorite meal: Pancacks and potato chips. Though the neighborhood around Sorrento Road hasn’t much changed, City Line has.